Cefalù will be the destination of summer 2018 - The famous magazine "Marie Claire" says it By Redazione cefalu.website 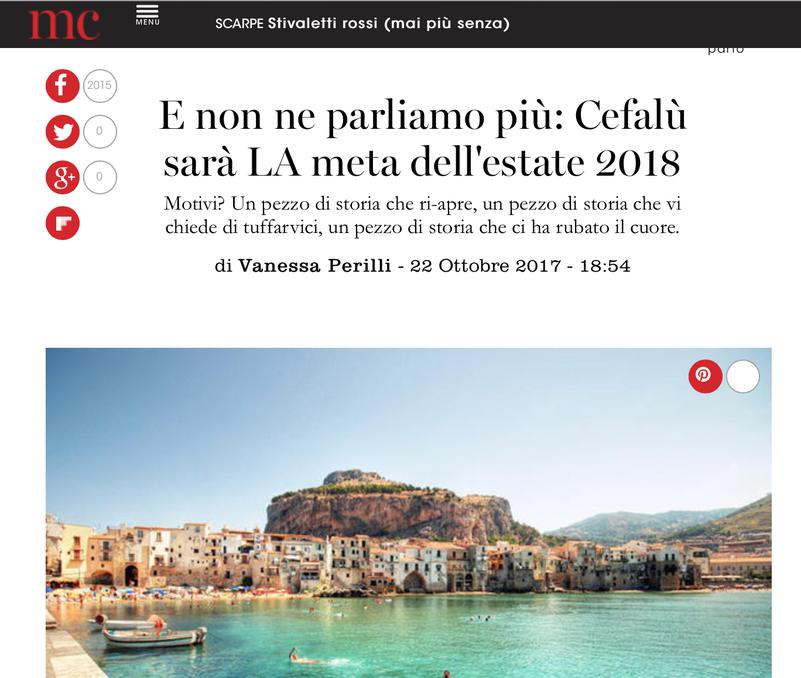 In a prestigious article, the "Marie Claire" magazine defines "Cefalù" as the destination for the summer of 2018.
We report the full article:

"Yes, it's very early to think about it, but no, too.What smart holidays are the ones you think in advance NETTO? Yes. Are smart holidays the ones that will amaze us? Yes. Smart vacations are those where every sin is granted? stay in Italy because the next summer 2018, before any foreign newspaper pretends to "rediscover" here is the pearl of the pearls of the Tyrrhenian Sea, Cefalù.The reasons to go / return? N. But above all these have (already) stolen the heart. ..

# 1 Mare a Cefalù = goodbye Caribbean. The sea brought the Greeks to Cefalù who founded it and made the fortune of the city since (also) the manual sand and the transparent sea are an irresistible attraction both for tourists and for locals who would not go anywhere else in the world ( and not even any other sea of ​​Sicily, let's say it). The beaches in Cefalù? In addition to the beach of Cefalù, limpidissimo despite being close to the town, not to be missed, a few kilometers away, are the beaches of Mazzaforno, Salinelle, Caldura, Pollina, Capo Playa and Sant'Ambrogio.

# 2 What to see in Cefalù. Declared in 2015 a World Heritage Site by UNESCO, the Cathedral of the Transfiguration, according to legend, would have arisen following the vote to the Most Holy Savior by Roger II, who escaped a storm and landed on the beaches of the town. Others believe that it was built to convert the numerous Muslims who at the time populated the northern coast of Sicily. Of Norman style, it boasts a beautiful portal with marble decorations and marvelous Byzantine golden mosaics.

# 3 Guilty Pleasure = Sicilian granita. Prepared only with strictly fresh fruit without the addition of syrups, they are an indispensable ritual throughout the island. More light (apart from some taste) of an ice cream, more refreshing than an ice lolly, they boast a sect of undisputed and unsuspecting food lovers. Must? Coffee, Almond, Pistachio. For connoisseurs? Strawberry, Chocolate, Figs, Mandarin, Mulberry. For the pros? Orange and Campari ... to taste with or without whipped cream and brioche (ps: if you sin sins in big style then CON).

# 4 Cefalù montanina = Madonie Park. Included in the list of UNESCO World Geoparks in 2015, this magnificent mountain range includes 15 municipalities of the metropolitan city of Palermo, including, precisely, Cefalù, and home to more than half of the Sicilian plant species. It is about 40 thousand hectares of natural landscape rich in oaks, birches, holm oaks and beeches, inhabited (also) by hares, hedgehogs, wild boars, deer, eagles and hawks. To spend a few hours in this park you can opt for one of the 20 trails of different difficulty or for the adventure park.

# 5 Game of Thrones in Cefalù = Medieval wash house. Of strong Arab influence, as suggested by the large ogival arch that overlooks the covered area, it is located in Via Vittorio Emanuele near the late Renaissance Palazzo Martino and is still intact. It is accessed through a lava stone staircase called a snail. Legend has it that Cephalino, the river that carries water here, was generated by the incessant tears of a repentant nymph of having punished with death the betrayal of her beloved.

# 6 What to eat in Cefalù = all sailors. Needless to go crazy looking for: look out over the harbor and "follow" the best catch of the day. Immoral NOT to try pasta with sardines, baked swordfish with pistachio breadcrumbs (okay you still had doubts about the next holidays, really?) And the stoccafisso alla messinese.

# 7 Where to sleep in Paradise = new Club Med Cefalù. Set inside the Madonie park (therefore: green lung with a perennially instagrammable sea view) re-connects the thread with a piece of tourism history. In fact in 1957 Gilbert Trigano co-member of the founder, the Belgian Gérard Blitz, chose Cefalù to create the first Italian Club Méditerranée. The ages have passed, but we always return (d) to the first love. For this reason the sun of Sicily arrived on an already dull Milanese day: and with him the announcement that Club Med returns to its origins and starting from next June 2018 re-opens its historic Sicilian location, inaugurating the first 5 Tridents Resort in Europe. Designed by architect King Rosselli, he wants you to fall in love in his 340 rooms, he wants you to immerse in his biological pool with attached spa signed Carita, wants to make you sin in the restaurant with a menu signed by starred chef Andrea Berton that will enhance the products at km 0 (ps : the restaurant is housed in a historic building of the '700, wow). True luxury? From cooking to the most alternative sport - or evergreen - that such a location can guarantee: from Pilates lessons such as morning awakening to a classic that is linked to this corner of the paradisiac world, sailing lessons at sunset. Holiday plan: where are you ?!

# 8 Sicilian clichés = Sicilian cannoli. Roman recipe, reworked by the Arabs and passed into the hands of the confectioners from Palermo and Messina, is one of the best known specialties of Sicilian - Italian confectionery. Okay is a classicone, yet he still manages to make anyone who grew up in the Lombard fog die of envy (for example). The secret of his infinite goodness? The sheep's ricotta which is enclosed in a tube-shaped fried waffle along with drops of dark chocolate and candied cherries.

# 9. Palermo = we said EVERYTHING. It is an hour's drive from Cefalù. What to see in a day in Palermo? Certainly the historic center (La Cattedrale, Fontana Pretoria, Palazzo dei Normanni, Cappella Palatina, Teatro Massimo, Church of Martorana, the Church of Santa Maria dell'Ammiraglio, Sanctuary of Santa Rosalia, I Quattro Canti), then one of the historical markets of city ​​(Ballarò, la Vucciria and Capo), finally a moment of relaxation in the wonderful beach (caribbean) of Mondello. Okay we are biased: but do you really want to exclude even one of these masterpieces? No.

# 10 Boat trip to the Aeolian = POSTCARD. The boat trips, active from March to November, have different durations depending on the itinerary. The shorter tour includes Alicudi and Filicudi, the smallest islands in the archipelago. We leave in the morning from Cefalù, we visit the islands and return in the late afternoon. Alternatively you can visit Lipari and Vulcano, returning at sunset. The longest exit involves the exploration of Stromboli and Panarea with return in the late evening. Attention: the Aeolian islands create high dependence on saltiness and good life. "